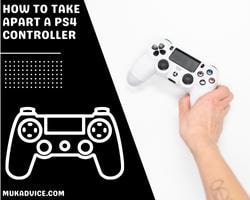 How to take apart a ps4 controller. PS4 is sturdily made, but if a problem occurs in the controller, you need to fix it to start your entertainment again.

It is not hard to detach the controller apart. With the help of some tools like a screwdriver, plastic opener, etc., you can fix it.

As compared to other play station controllers, ps4 has its own different way of opening. But not impossible you can get apart from it by using some techniques.

How to take apart a ps4 controller

Following a few steps, you can open it safely and fix it completely without distraction.

There are some best techniques to apart the ps4 controller and some tricks from which you fix it without taking the help of another person.

Take off the back cover

To rid of from problem. You should not open the front; first, you should detach the back cover.

So for this, take a screwdriver that matches the screw top; it has 4 or 5 screws depending upon the controller made.

You can also use the heat gun to open the back cover if it is attached to an adhesive. Screw off all of this smoothly without applying much force.

To Take off all External body

Once the back cover opens, it’s time to remove the gaming pad. To take off, you should need a plastic opener tool.

First, you have to open the case around the headphone jack, then open the case between the left and right triggers. After this gamepad will take off.

After opening the gamepad, you see a backlight FFC wire. Remove it softly because it is an important part.

A big problem will create if it becomes damaged, so always be careful when removing it. The gamepad becomes easily detached completely from the body.

To Pullout the Battery

Decently remove the wire, so the battery pulls out from the body. Then you see a battery scoring strip behind the battery area, so you have to remove it with the help of a tool.

Extract the main board 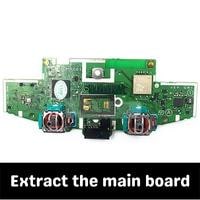 All functions work because of the electric board. This board is also attached to the screws, so to detach it, you need a screwdriver.

Rotate and open all of the screws, and then the main electric circuit will separate from the body of Ps4.

If the body is joined with an adhesive, then to open it properly, heat it with normal warmth because too warm heat air can expand its body and ruin its shape.

Be careful when opening the trigger side panel because applying more force on the panel can faulty the triggers.

Strips are soft, and they become cracked with some extra force. Always take it off with soft hands because it is difficult to replace if the strip becomes cracked.

The battery cover is made up of a thin sheet so remove it decently. It is an essential sheet that saves the battery from any mishap.

The electric board is made up of strong material, and there are many components attached to it.

Most components are not attached strongly, so it can leave space and another new issue crate for you. The best solution for this is to open the screw with an accurate screwdriver and perform this task comfortably.

Separate the body using the plastic opening tool because using a hand can break it into two pieces. Adjust all screws in their position. Don’t miss any screw. It causes problems. 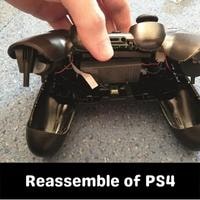 It needs much care to assemble again. After fixing the problem, then it’s time to resemble it. Firstly connect the circuit board using a screwdriver.

After this check, the buttons and trigger are placed at their right position then it’s the option whether you use want to apply adhesive or not.

Then join both parts of the body equally and attach all the screws to their exact point by using the screwdriver.

How to take apart a ps4 controller. This article has some best tips and tricks from which you can open the body’s structure and fix any problem. In this, there are complete steps of opening all parts of ps4.

After apart this, you can replace the battery, clean the body, and change buttons and all parts which are making trouble.

Follow all steps carefully because, from this, you can fix it yourself without interruption and continues your gaming and all entertainment purpose.